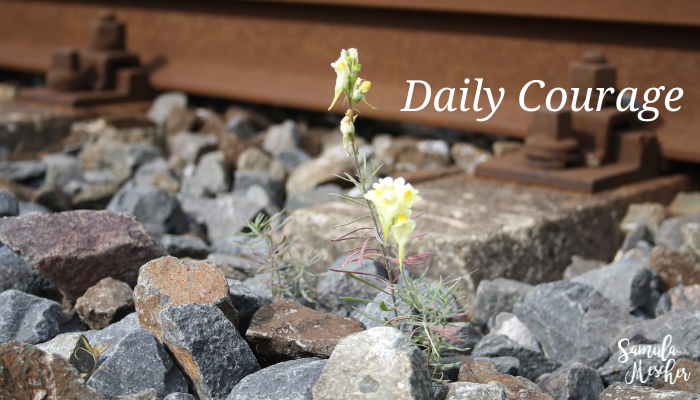 What images do courage or being courageous bring to mind? Maybe you think of a knight in a knights tournament risking his life. Or a relief worker, working in a war zone. Or maybe someone who quits her job, sells her house and moves to France to start a B&B. Often courage is associated with heroism and big deeds. Sometimes courage is seen as not being afraid of anything or anyone. Or courage is equated with not showing your fear.

Every day there are small moments that require daily courage

Seemingly small consequences
These are all moments where the choice to be courageous or not, seems to have no big  consequences. When you choose to not be courageous in those moments, it actually seems as if nothing happened. For example, when you don’t have that difficult conversation, when you say yes when it actually should be a no, when you don’t speak up in that meeting. Nobody dies, no big injustice or suffering is perpetuated, nothing bad happens….

At the same time, daily courage can invoke the same fear or nerves as big heroic deeds
If you contrast this feeling with the seemingly small consequences of not doing the courageous thing…. It is no wonder we often say yes when we mean no, it is no wonder that we don’t raise our hands to work on this project, that we soldier on for another hour while we are dead tired. But…

These small moments where you can choose daily courage are actually enormously powerful and very important!
Daily courage means choosing to be true to yourself. Not choosing daily courage often means conforming. Conforming to something that does not fit who you are. As a consequence, you hide more and more who you really are, what you really want and what you are really capable of. This comes at a high price! You wander further and further way from your unique strengths, yourself and what makes you happy. And the world loses the unique contribution you can make!

That is why I believe that daily courage is indispensable to live a meaningful life, full of joy and energy.

An example of daily courage of my son to inspire you
(I’m sharing this story with the consent of my son)
A couple of years ago. My son, who was 9 at the time, has a disco party at school. On the invitation it says dress code: scary. Because my son really hates dressing up ever since he was a little boy, I ask him what he wants to do for the party.” Do we have to go out and buy you a costume or is this not necessary? He knows immediately: “no, I don’t want to dress up”. The evening of the disco party he goes to the party in his regular clothes. When he comes home after the party he is upset and very sad. Everyone in his class had been wearing costumes and that was not something he had expected. On top of that, some kids had made remarks about the fact that he was not wearing a costume. That night we lie in bed together, cuddling for a very long time and talking about what happened. After a while I ask him: “if you had known beforehand that every one would be dressed up… would you then have wanted to dress up yourself?” And again his answer is very clear: “No!” I answer him:”Then you have made the right choice, little guy”. A beautiful conversation follows about how difficult it can be to not conform, to stay true to yourself and what it brings you when you find the courage to stay true to yourself.

Fast forward to 6 months later. The school has its 25 year anniversary and there is a big party. Everyone can come to school dressed in a costume. My son is looking forward to the party, but at the same time not looking forward to it, given his experience with the other party. Again I ask him what he wants. No, he does not want to dress up but also dreads going to the party because of that. Together we come up with a plan about what he can do to make this day easier for him. He is going to talk to his friends beforehand that he will not be dressing up on that day. We come up with a joke he can use when somebody remarks on his clothes. And I advise him to have a really good look around that day at the party. He surely will not be the only kid in the school that is not wearing a costume. And again he goes to the party in his regular clothes. But this time I pick up a relieved and happy boy: he had fun and stayed true to himself!

What will your act of daily courage be this week? Would love to know! Just send me an email or place a comment down below.

Wishing you lots of courage this week!