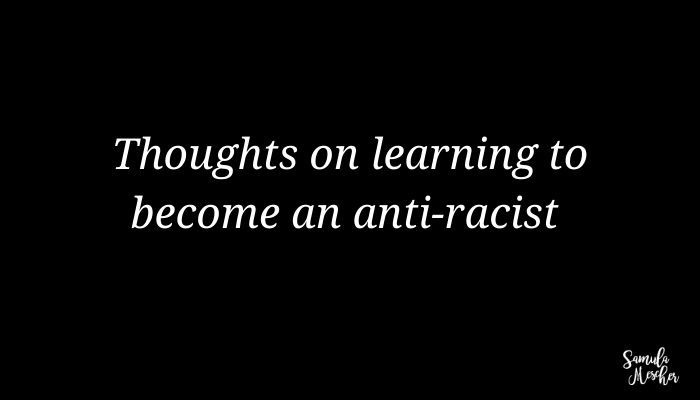 ***Warning: this is a different blog than usual*** That is why I was hesitant whether or not to write this.  This is a blog about my own searching. I share my own searching process more often in my inspiration mails. However, it is always followed by some concrete learnings or practical tips or actions. Since I feel so much at the beginning of this learning I feel I cannot share practical tips or actions. So this is me only sharing my searching. Another reason I was hesitant to write this inspiration mail was that it seems to be very off topic. After all my inspiration mails are about work-life balance and making choices. In a way it is off topic. And in another way it isn’t.

Last weeks blog (Overwhelmed by the change you want to make?) was actually inspired by my own struggle and learning the past couple of weeks with the death of George Floyd in the US. I felt an urgency to learn, to contribute to change, to become more aware of my own unintended racism as a white woman (because I know we all have this inside of us, even if we so desperately don’t want to be racist). How can I become an anti-racist? I dove right in, what are the books I can learn from, people on social media I can learn from, podcasts to listen to? Started reading articles, listening, talking to people about it and reading on social media and then felt… overwhelm. So much overwhelm and so many emotions and I felt so tired. So much to learn, so many voices telling stories, telling me as a white privileged person, what to do, say, not say, not do…. So much for me to learn. So much to absorb. At first I resisted this overwhelm, I felt I could not slow down, or take smaller steps. Because, after all, the ability to slow down while learning about racism is a form of white privilege in itself. Learning about racism instead of experiencing racism is white privilege as well.

I also feel hope and hopelessness at the same time. I am hopeful about the possibility for change. I feel hopeful that this time change will come, that this time change has to come! This hope is fuelled by the massive protests in America and in other countries as well.  It is fuelled by books about antiracism being at the top of bestsellers lists right now. By seeing conversations about anti racism on the social platforms and online groups I am part of.  At the same time I felt hopeless as well. Listening to all kinds of different BIPOC (Black, Indigenous, and People of Color) voices telling me what I should do, shouldn’t do, could do, couldn’t do, should say, shouldn’t say also made me feel hopeless. That there was no way I could do it right no matter how much I wanted to. And maybe this hopelessness that I felt is mirroring a tiny bit of the hopelessness many BIPOC people have felt their whole lives! Or maybe this is a form of white fragility *).

And there is a lot of unease (just like I learned from anti-racist voices- the work of becoming an anti-racist is really uncomfortable). Unease about having conversations with my friends about this (I live in a very white bubble in the Netherlands). Next to the unease about whether I should write this mail to you, I am also experiencing a different kind of unease. About the harsh tone that is putting me off sometimes and knowing at the same time that in the anti-racism debate this could be seen as a tactic of white privileged people called tone policing **).  I also feel unease about the feeling that I get from the conversation that my ability to look for different angles, different ways of looking, different interpretations might be seen as a racist move as well. Because so many times BIPOC people have been questioned when they said they had experienced racism:  “Are you sure it was because of racism you did not get that job, are you sure that it was racism when that person reacted in that way?” It could also be….. And then a more neutral explanation would follow. I see how this move denies the experience of racism and reproduces racism. At the same time I don’t want to give up on my ability to always look for multiple interpretations, my critical thinking (I used a lot of critical analysis in my dissertation).

I guess I really have started to do the work of becoming an anti-racist: As Layla Saad says in introduction of her book Me and white supremacy: “This work sounds overwhelming, intimidating and unrewarding. I won’t lie to you: it is”. That pretty much sums up the last couple of weeks.

Do you want to share something, or do you have a question?  Just send me an email at samula@samulamescher.nl

*) Layla Saad uses the definition of Robin DiAngelo. “White fragility is a state in which even a minimum amount of racial stress becomes intolerable, triggering a range of defensive moves” (Layla Saad, Me and White Supremacy : How to Recognise Your Privilege, Combat Racism and Change the World, p.43)

**)“Tone policing is a tactic used by those who have privilege to silence those who do not by focusing on the tone of what is being said rather than the actual content.” (Layla Saad, Me and White Supremacy”, p. 47)